Benediktbeuern Abbey - one of Bavaria's oldest and best-preserved - is situated just outside the village of the same name on the way between Kochel am See and Bad Tölz.

The site has been a religious centre for more than 1250 years although the present building complex dates from the early Baroque period of architecture.

The location makes it a good stop for those taking the scenic German Alpine Road route. 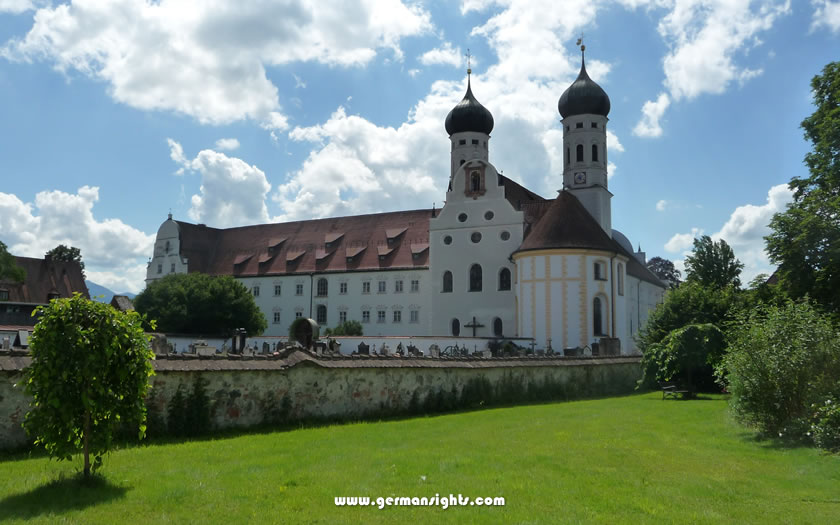 The original monastery was founded in the 8th century by the Benedictine order and and served as a religious and cultural centre for the area, with holdings stretching south into the Tyrol and present-day Italy.

A strategic settlement called "Buron" had already been established by the Frankish rulers and the monastery was added under the religious reorganisation of the area under St Bonifatius. The importance of the establishment was shown by the grant of a prestigious relic - the arm of St Benedictine - to make the abbey a place of pilgrimage.

Like many other villages and monasteries in the region, the original buildings were destroyed by Magyar invasions, but were quickly rebuilt. Most of the current buildings - such as the Anastasia chapel and the basilica of St Benedict - date from the 17th and 18th century when some of the most prestigious architects and painters were called to work on religious architecture.

The abbey was renowned for its production and collection of illustrated manuscripts - one collection of bawdy travellers' tales was discovered following the secularisation in the early 19th century and became famous when set to music. Carmina Burana - a well-known piece of music by Carl Orff - actually means "songs from Beuren".

Following the change in 1803, the abbey was used (amongst other things) as a glassworks. The optics produced there led to improvements in the glass used for telescopes and microscopes and the work from that time is displayed in the Fraunhofer Museum in the grounds.

The abbey has been in the hands of the Salesian Order of Don Bosco since 1930 (a Roman Catholic organisation which concentrates on the education of poor or at-risk children).

Map of Accommodation near Benediktbeuern