Ulm is one of the major cities in Baden-Württemberg and famous, amongst other things, for its spectacular minster right in the centre.

Originally it was an important port on the Danube - German-speaking emigrants set off here to head downstream to settle areas of Eastern Europe. 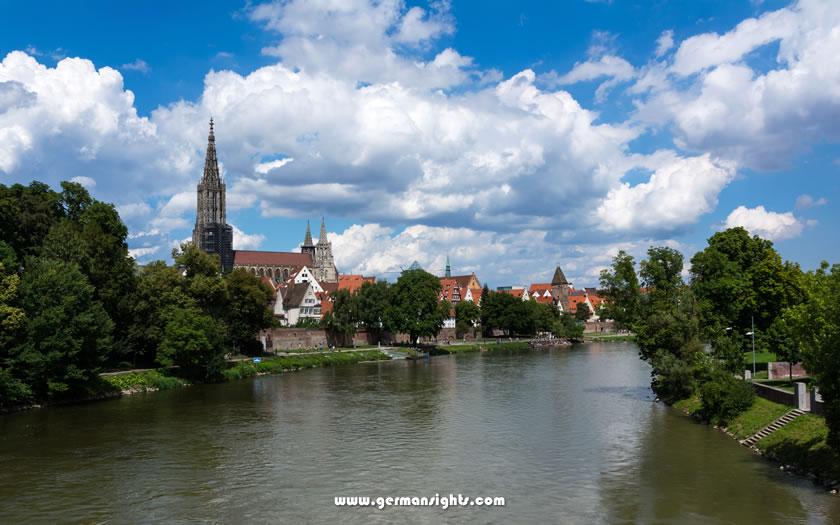 View of Ulm on the Danube river

There is a fair range of hotel accommodation both in Ulm and just over the river in Neu-Ulm. Listings and information about travel to the city can be found on our Ulm travel page: Ulm Hotels & Travel

The area around Ulm is thought to have first been settled back in the Stone Age. The first official mention of the city comes back in the 9th century, when it was being used as a 'Königspfalz' - a German term meaning a temporary palace which would be used by a travelling king and his retinue.

The city and many of the surrounding villages were destroyed during wars between rival claimants to the throne of Germany and title of Holy Roman Emperor. 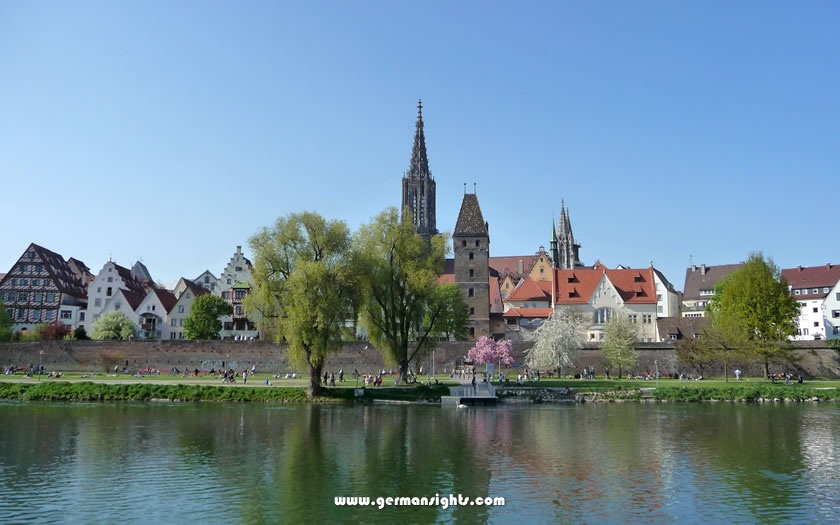 The centre of Ulm seen from across the River Danube

Ulm was rebuilt during the rule of the Hohenstaufen dynasty and given its town charter (and subsequently its rights as an autonomous town - a 'Reichsstadt') in the 12th century.

The inhabitants busied themselves by protecting their freshly-won rights. The original town walls can still be seen in parts of Ulm (for example, in the Fischerviertel). As the town grew more wealthy, it expanded rapidly and the city walls that can nowadays be seen were built in the 14th and 15th centuries.

One of the major advantages of Ulm - as with so many other present-day large towns - was its strategic position and transport connections. The Romans recognised the location as important as it marked the border of what was known as Imperial Rome.

Ulm was the destination for raft traffic bringing goods out of the Alpine region near Oberstdorf. It is also situated at the first navigable point of the Danube for larger boats and was an important port for downstream exports in the days when the land journey was slower and more dangerous.

In later centuries many poorer inhabitants of Swabia (the cultural region surrounding Ulm) emigrated to the eastern European regions which had been liberated from Turkish rule, using distinctive boats which housed over a hundred passengers and which were broken up for timber at the end of the journey down the Danube.

The Middle Ages were a time of great turbulence for Ulm. There were political arguments between the power blocs of the aristocratic families and the rich merchants (settled over the medium term in favour of the merchants) and later religious disputes between Catholics and the new Protestant religion.

Ulm took the Protestant side in the wars of the Reformation, but ended up on the losing side. The beginning of the 16th century had been Ulm's heyday and there now followed a succession of central European wars which helped bankrupt the town.

At the same time, the discovery of America diminished the importance of Ulm's transport connections to the east and, in the early 19th century, the town was transferred from Bavaria to Württemberg, losing political importance along the way.

The building of a massive military fortress (housing thousands of soldiers in peacetime) helped alleviate some of the economic problems. Ulm and the neighbouring town of Neu-Ulm across the river were one of the biggest garrisons in Germany.

Over 80% of the town was destroyed during bombing raids in the Second World War - the famous church spire remained untouched, however.

The minster in Ulm - with the highest church spire in the world - is the symbol of the city. ('Minster' is a title used for certain large churches and the Ulm Minster is the largest evangelical church in Germany.)

Started in the 14th century, it took another five centuries to finish the construction. By that time, the church that had been started in a Catholic community became one of the most visible Protestant symbols. 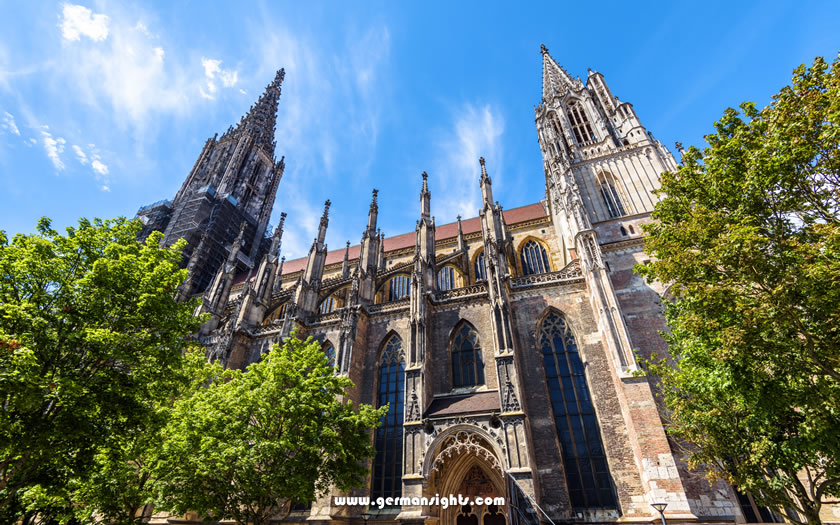 The spectacular Ulm Minster in the heart of the city

Despite its height and imposing mass in the town centre, the building was never intended as a cathedral (as many other major ecclesiastical construction projects were elsewhere). It was financed by the citizens of Ulm and designed for them to exert control over their parish church.

The previous church had been outside the town walls - which was problematic in troubled times - and was administered by the Reichenau monastery on Lake Constance - which meant that the wealth of the church and the donations to it went to the monks.

The reason for the lengthy construction time was financial - the citizens ran out of money to complete the building and construction work was put on hold for three centuries. It was only in 1890 that the final work was completed.

The famous church spire is slightly more than 160m in height and it is possible to climb to over 140m during opening hours. This involves first climbing one of the side pillars (one is used on the way up and one on the way down) until the narrower top section of the central spire is reached.

Traffic is in both directions here and the top section is quite cosy when many people are squeezing past each other. The views over Ulm and, on certain very clear days, through to the Alps from the top gallery after climbing a total of 768 steps are however worth all of the effort.

In 2015 the Ulm Minster celebrated the 125th anniversary of the completion of the church.

This is one of the most picturesque and historic parts of the city. The Fishermen and Tanners' Quarter dates back to the Middle Ages and can be found in a relatively small area between the river Danube, the main Neue Strasse street and the railway lines.

The area is best seen during a quiet stroll in the early morning. It can become crowded later in the day and in the evening it is a popular location for a meal and a drink.

When the buildings in this area were originally constructed back in the early Middle Ages many of them were outside the city walls of the time. Tanning, especially, was a dirty and extremely smelly occupation and the inhabitants of the area were considered rough and ready work people. 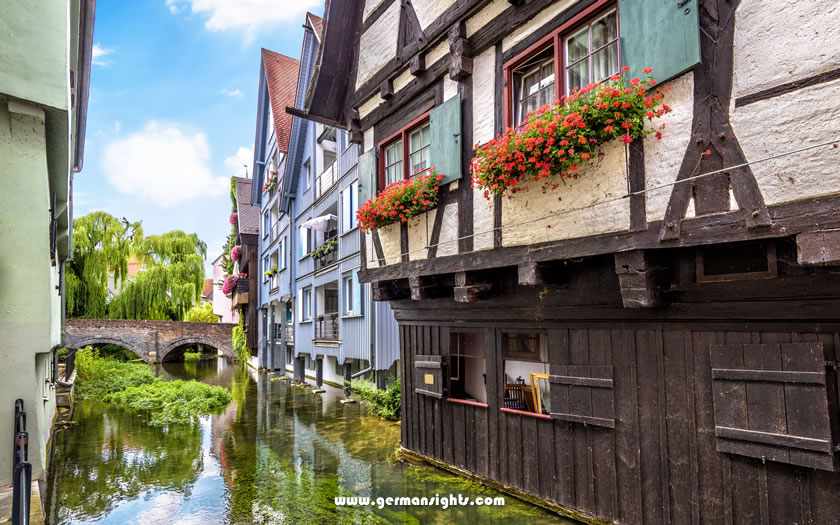 Old houses in the Fishermen's Quarter in Ulm

Over the years Ulm slowly expanded and the Fischerviertel was enclosed within the new city walls.

It was also where the ships were constructed to make the journey down the Danube. The former shipbuilding guild's headquarters, the Zunfthaus, has now been converted into a restaurant.

The current of the Grosse Blau stream flowing through the area was used for a number of watermills. The oldest remaining mill and waterwheel, the Lochmühle near the Neue Strasse, has also been renovated and turned into a restaurant.

The Ulm Tourist Office is located in the centre square opposite the minster in the new Stadthaus building. It is open all week in the summer and from Monday-Saturday in the winter. Traditional guided city tours are available as well as Segway tours and audio guides.
Website: www.tourismus.ulm.de