Villingen-Schwenningen is a rather odd administrative 'town' created in 1972 near the eastern edge of the Black Forest in Baden-Württemberg which is made up of two very different communities.

Villingen is the more attractive of the two and thus the more popular with visitors to the area. It has a compact historic centre with plenty of sights from its origins in the original Grand Duchy of Baden.

Eight kilometres to the east, with a different telephone number and an industrial past, Schwenningen only became a town in the Kingdom of Württemberg at the start of the 20th century. 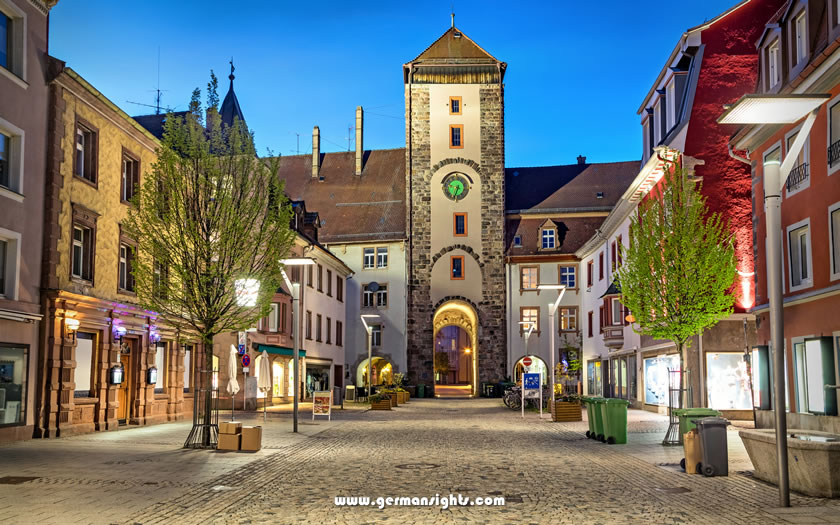 The Upper Gate of the old town walls in Villingen

Villingen is on the main Schwarzwaldbahn through the Black Forest with InterCity connections. Both Villingen and Schwenningen are part of the Ringzug rail service which connects other towns in the region. More information about public transport and the nearest airport options is available on our Villingen-Schwenningen travel page along with some options for accommodation:
Villingen-Schwenningen Hotels & Travel

Villingen is by far the older of the two settlements, with remains of Stone Age villages having been found nearby. Both Villingen and Schwenningen are first mentioned in the 9th century but three centuries on Villingen had received its town charter and become a Free Imperial City while Schwenningen remained a village.

Villingen was purchased by an Austrian count in the 14th century and remained part of Austria until the Napoleonic era. It came under siege a number of times during the wars of the Middle Ages but was not defeated until the War of the Spanish Succession in the 18th century. Even then, the town was forced to open its gates by external circumstances and not by suffering a military defeat. 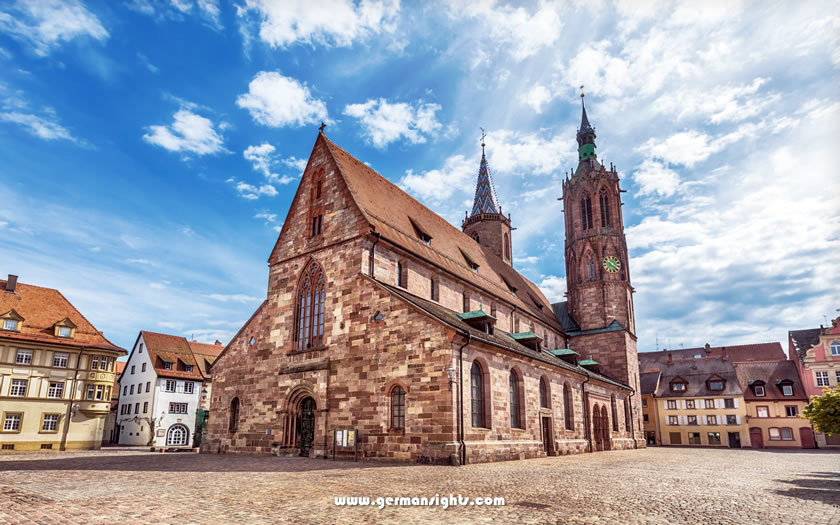 The Minster of Our Lady at Villingen

The remains of many of the defensive fortifications which protected the town are still visible, with the towers and town wall surrounding the current pedestrian area, town hall and minster.

With one of the treaties bringing a temporary peace during the Napoleonic wars, Villingen became part of the Kingdom of Württemberg. Only temporarily, however, as it was swapped with the Grand Duchy of Baden for other territory that the Kingdom desired.

Both Schwenningen and Villingen started a rapid expansion in population with new rail connections in the 19th century and increasing industrialisation. Schwenningen, in particular, became a centre for watchmaking with a number of important companies growing from their bases in the former village.

The two communities were joined by the administrative reform in Baden-Württemberg in the 1970s.

The tourist information office in Villingen is located on Rietstrasse near the Riettor tower in the Franciscan cultural and concert hall. It is open every day with slightly restricted hours on Sunday.
Tourist Office: www.villingen-schwenningen.de (German only)