This section of the German Alpine Road information is designed to give an idea of the options for getting there, getting around and the various modes of transport that are available.

The route was originally designed for those with their own wheels (actually originally for horse and carriage, to be accurate).

But it is possible for those relying on public transport and their own ingenuity to make their way around the area. 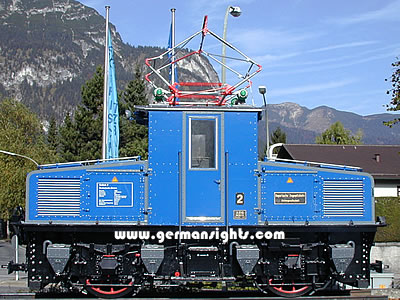 By far and away the 'biggest' airport suitable for starting a tour of the Alpine Road is Munich. It is relatively easy to get to any part of the route from the city and the distances are pretty reasonable whether heading to the west, east or centre.

Two other airports in Germany that come into play are Memmingen (Allgäu Airport) and Friedrichshafen, especially for those who are arriving from the UK. Both have low-cost flights but the choice of departure point is going to be limited.

Because the Alpine Road runs so close to the border with Austria, both Salzburg and Innsbruck, with their wide range of weekend and midweek charter flights from the UK and a decent amount of scheduled traffic, become sensible options for those looking for alternatives.

Finally, those starting a tour at the Lindau end might consider Zürich, another big airport with scheduled flights from around the world.

Public Transport and the Alpine Road

Bavaria has a stunningly good public transport system. The trains and buses can be combined on very reasonable 'travel-as-much-as-you-like' day tickets within the state and the transport is clean, modern and punctual.

Unfortunately, the way the west-east route runs crosses most of these north-south public transport routes, making a keen eye necessary to pick out the best ways to get from one place to another.

It is certainly possible to use a combination of trains and buses to get around - it just means that it is going to take longer and might not follow the exact route to the official recommendations.

Probably the best idea is to look at the German railway website (there is an English-language section) and start working out the combinations of journeys between the desired destinations.

The ticket referred to above is called the Bayern-Ticket and allows unlimited travel after 09.00 on regional (e.g. non-express) trains and all public bus services. This is particularly convenient as extra passengers can be added for a few Euros each up to a maximum of five persons in total.

There may also be some cheaper alternatives (also with restrictions) on the suburban services which run into the different regions south of Munich (for example, the Werdenfels ticket for those headed to Oberammergau or Garmisch-Partenkirchen).

These special ticket prices are automatically displayed on the website when qualifying services are available and cheaper using the ticket.
Website: www.bahn.de

Car hire is available from airports and the bigger towns along the Alpine Road for those arriving by plane. And, of course, one of the big attractions of the Alpine Road is using one's own vehicle or motorbike to make diversions off the recommended route to sites of interest.

Although the roads are generally in excellent condition, it should be remembered that some of them are country roads over alpine passes and thus probably not suited for timid or inexperienced drivers.

A close eye should also be kept on the petrol gauge as there can be a distance between stations (especially in the evening or on a Sunday) on the more remote sections of the route. There are however plenty of options for filling up in the towns and on some of the more major routes that are used along the way.

All of the route runs through rural areas - this means that tractors and, at certain times of the summer, even livestock can appear unexpectedly on the road.

The area is also one of the most popular tourist destinations and thus care should be taken for slow-moving vehicles, motorbikes, cyclists and walkers.